Christmas, 1864  The valiant Army of Tennessee had been smashed and its tattered remnants were in full retreat as they were closely pursued by General Thomas’ Army of the Cumberland.

During the pursuit, a Union brigadier sends an urgent message to his divisional headquarters: “please relieve me;” the dispatch read, “I am suffering from an attack of General Debility.”

The odd dispatch was met with some derision at division headquarters, but the divisional commander wrote a prescription to cure his brigade commander’s ailment: three regiments of infantry and a battery of Rodman guns.  Far more formidable than General Debility that December, however, was General Winter.

You may not have heard of General Winter before, yet this general was the most effective presence on the field of battle during the Civil War, more so than any field commander North or South. Winter influenced the outcome of many major battles. In the campaigns of the Western Theatre, in particular, General Winter played a commanding role.

Reading many of the soldier’s accounts of the era, one gets the impression that the Army of the Potomac during the winter months simply hunkered down in their comfortable quarters surrounding Washington, DC and waited until life was more pleasant in the field. General McClellan did not want his precious boys getting their feet wet, or otherwise suffering discomfort and the easterners of his army appreciated him for preserving them from harm–so did the Confederates. The Rebel Army of Northern Virginia did not pass the winter in such luxury, but they also chose not to go on the offensive when the weather turned cold.

In stark contrast, in the West, the Federals campaigned repeatedly in the midst of bone-chilling cold and foul winter weather, and their Butternut-clad foes did likewise.  The war in the West did not stop simply because General Winter was abroad in the land.

In January of 1862, for example, General Grant led the expedition against Confederate fortresses of Forts Donelson and Henry. It was bitter cold that winter and the Rebel troops were inadequately clothed. During the siege, the Union troops who fell assaulting Fort Donelson were caught out in the open between the opposing lines. The cries of the wounded, exposed and freezing, tore at the hearts of their comrades who were unable to rescue them. Many who could have survived otherwise died of exposure.

At the Battle of Stone’s River in late December of 1862, both sides were also affected by the bitter cold. On the night of the first day’s fight, the Federal Army of the Cumberland was forbidden to light any fires, lest the enemy use them for target practice; to add to the misery, most troops had shed their backpacks containing blankets in the chaos of battle and Rebel cavalry had destroyed most of the wagons containing tents. But it was the wounded left on the field after the first day’s fight who suffered the most. Ambrose Bierce graphically described the situation in a forgotten small piece called “A Cold Night.” Men on both sides, wounded and unable to move, froze to death in the dark.

Returning to the Autumn Campaign of 1864 and the Battle of Nashville, General Winter also played an important role here as well. While the Federals had comfortable quarters within the siege lines of Nashville, without, the Rebels shivered, ill fed, ill clothed and short of most other supplies. Whole forests outside the city were cut down to keep warm by the Confederate Army of Tennessee and the resulting deforestation was called even by sympathetic citizens as “Hood’s Waste.”

However, the Federals too were affected by the winter weather in December of 1864. Although General Thomas had gathered together a mighty army to counter Hood’s Confederates, his counterattack had to be delayed. A terrible ice storm hit the city in the early part of December, making all roads impassable for his cavalry, without which Thomas was unable to attack.

While waiting for the roads the thaw out, General Thomas, the “Rock of Chickamauga” was almost sacked by Grant, who sitting in comfort back east, accused Thomas of being “slow.” General Thomas came near to defeat, not due to General Hood, but due to General Winter. In the end, Thomas unleashed the Army of the Cumberland and achieved an overwhelming victory.

While most historians aver that the Civil War was won Appomattox in 1865, in truth the war was lost for the South at Nashville, in December of 1864.

For more true tales of the Civil War, see Ghosts and Haunts of the Civil War and The Paranormal Presidency of Abraham Lincoln.  Now in print, Ambrose Bierce and the Period of Honorable Strife is an in depth look at the famous author and his war experiences. 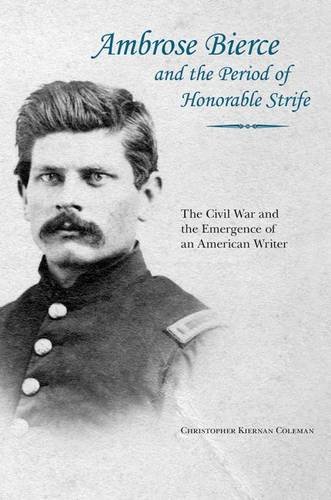 Ambrose Bierce is famed as a noted American writer, satirist and cynic. Less well known is Bierce’s military career during the Civil War, where he fought with distinction in many of the major battles of the war. Ambrose Bierce and the Period of Honorable Strife chronicles his wartime experiences in depth for the first time.

I am an author, lecturer, and consultant with six books currently in print. My areas of expertise are diverse and my interests span a wide variety of subjects, including Archaeology, History, Folklore, paranormal phenomena and forteana , as well as anthropology, working in different literary genres, plus things that go bump in the night. I currently have six books in print: Strange Tales of the Dark and Bloody Ground, Ghosts and Haunts of the Civil War, Dixie Spirits, Ghosts and Haunts of Tennessee, and The Paranormal Presidency of Abraham Lincoln, a factual history of some more esoteric--and hitherto overlooked--aspects the sixteenth President. My most recent effort is Ambrose Bierce and the Period of Honorable Strife, published in hardcover by the University of Tennessee Press and chronicling the wartime experiences of young Ambrose Bierce, noted American author. Bierce has been called many things by many people, but hero and patriot and idealist, should be added to the list after reading this book. I am currently at work on several projects, some dealing with the American experience but also several fiction and non-fiction works exploring the mysterious recesses of the Age of Arthur. View all posts by Christopher Coleman

This site uses Akismet to reduce spam. Learn how your comment data is processed.